skip to main | skip to sidebar

The 2 John Bull characters really are great for entertaining in walkabout situations. They can utilize their mime and verbal skills to add to most events. Whether it be a day promoting motorsport in Britain to welcoming guests to a charity ball. They create a visual impact the moment they are seen and brendan and mel use their skills to add to what a client wants and needs for their event.
Posted by melvyn.altwarg@gmail.com at 6:30 AM No comments:

A historic moment for Mimescape 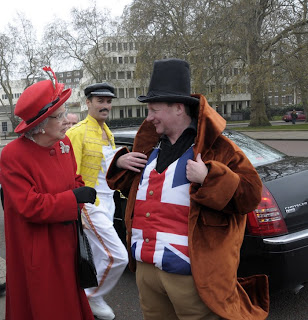 Mimescape helping to support the charity Get Kids Going. This was all part of helping to create the promotion for Mr Slow Mo who was finishing the marathon one week late in order he hopes to raise 2 million pounds for this childrens charity. Here is brendan as john bull in a historic meeting. The john bull characters utilise a range of skills from Mime to physical theatre. As part of Mimescape brendan and mel have an incredible expertise with mime skills from illusionary mime to slow motion and robotics.
On this particular occasion mel was using his skills as one of the pressmen/fake paparazzi to support this charity. There is a report from the BBC as video footage showing mimescape and the pressmen on the website www.pressmen.co.uk
Posted by melvyn.altwarg@gmail.com at 6:17 AM No comments:

Melvyn was just on BBC news whilst working with the pressmen as fake paparazzi/spoof paparazzi and event photographers at Aintree for the style pickers.
Posted by melvyn.altwarg@gmail.com at 2:39 AM No comments: